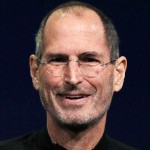 Steve Jobs was a brilliant man, a visionary. He was larger than life, and now on screen in the film about his life, Steve Jobs again has become a fascination to many. His personal life has become a fascination to many, despite his brilliance in the realm of technology that revolutionized the world, his personal life revealed him as a man with interpersonal struggles. In fact, he has been called a jerk  in various posts including Business Insider.

When Steve Jobs died, I became fascinated with news about him. Almost all the news depicted a visionary, a genius, a man who was compared to the likes of Einstein and Edison – and with good reason. He was an inventor, a creative and forward thinker, and he transformed the world of computer technology, film and music. His innovations have affected billions of people around the globe, and his “user friendly” technology has made life so much easier for the average person. With his brilliance and ability to be a true visionary, he made it possible for so many of us to use technology in a way that is intuitive and easy.

Steve Jobs affected me in a personal way. First, I use the I phone, I MAC, and have a MAC desktop and have been able to expand my computer skills considerably since I swore off non- Apple products. But he affected me so much more than that. I learned so much from the lessons he gave all of us. He showed how to bounce back from embarrassment and disgrace and begin again after being fired from his own company that he founded in his early thirties. He showed that you can achieve great things if you were true to yourself, if you tried to pursue your own passion, not someone else’s.

I was fortunate to attend the Stanford graduation in 2005, when my son was in the graduating class. Little did I know at the time that this would be Steve Job’s famous speech. At the time I liked the speech and was impressed by the down to earth advice. But it was a hot, sweltering day, and I was more caught up in my discomfort over the sun and heat than being really tuned into the meaningfulness of his message. Yet, even at the time, I knew his words were truly chilling, despite the very hot day. In the six years plus since that day, I have often relayed his message to give me strength in my own life and have shared his ideas to countless clients over the years. The utter brilliant simplicity of his message has struck a chord in me, and along with the ability to make movies and listen to music so easily with his inventions, I have grown with his wise words and ability to cut right into the meaning of life.

In his speech, he talked of success after failure, using the specter of death and the realization that you are going to die to give you the ability to really live your life, and the importance of trusting that you can only figure out the significance of your life choices looking back as you connect the dots. Seemingly meaningless choices and occurrences might only be truly understood in looking back from the perspective of experience, as only then one knows the significance of seemingly random events. His wisdom has guided me and my clients through times of uncertainty, shining like a beacon of hope that there is meaning in not only suffering, but facing death itself,and the specter of death to live life to its fullest.

Of course, such an influential man had no doubt his detractors. Steve Marks writes in his Forbes Column about how Steve Jobs was known to be by many to be insolent, rude and narcissistic. In his article, “Steve Jobs was a Jerk, Good for him” (http://search.forbes.com/search/colArchiveSearch?

author=gene+and+marks&aname=Gene+Marks) he depicts a man who was more ruthless than benevolent, and more of an autocrat than a diplomat. However, to reduce Steve Jobs as a jerk is almost as far fetched as regarding him as saint. Steve Jobs was human, and he showed us how complicated it is to be human. He initially denied paternity of his child out of wedlock , and even after acknowledging paternity, has had a hot and cold relationship with her. Maureen Dowd in her New York Times Piece on the Limits of Magical Thinking depicted Jobs as a father who had “layers of resentment” with his oldest daughter out of wedlock, and claims he even seemed to favor his son over his other two daughters, http://www.nytimes.com/2011/10/26/opinion/limits-of-magical-thinking.html?smid=tw-NYTimesDowd&seid=auto

What parents are always perfect with their children? Chrisann Brennan, the mother of his oldest daughter, claimed that having been abandoned at birth Jobs was ““full of broken glass.” Yes, Jobs was great in many ways, but all humans fall short and he was no exception.

Even the greatest of minds have their moments of of foolishness. Even his biographer, Walter Isaacson, thought that Job’s refusal to initially treat his cancer with surgery until many months later after it spread, preferring natural remedies that defied conventional medicine, showed “magical thinking.” Yes, Steve Jobs showed us that no matter how brilliant you are, it does not mean you are not human, and perfection in being human is impossible. Interestingly enough, Steve Jobs ended his graduation speech citing the words of the Whole Earth Catalog in their last issue, “ Stay Hungry, Be Foolish!” Jobs, himself, showed his own ability to be foolish, although that certainly was not what he intended as he spoke at the Stanford commencement!

So, in conclusion, Steve Jobs was not a jerk. He was mortal, he was human. He was more brilliant and certainly did better at pursuing his dreams than most of us, but at times just like all of us, his dreams, visions and aspirations could not protect him from falling short in his private life. He was not a jerk – he was a complicated man who can not be defined only by his best moments, but also not defined by his worst ones either. He showed us how we can reach so high and still fall short, and it is very complicated being a human being. What a wonderful example to impart to our clients! He was not defined by only his best or his worst moments. Despite his brilliance and innovations, he is more like us than we might have realized!